A week-long grounding retreat where nurturing body and soul takes the stage. You will discover the genius of creating boundaries from the divine feminine to support your well-being. It is all about effortlessness, grace and allowing. We will be staying in the beautiful region of Tuscany where the land offers all that is needed to soothe the soul, ground the mind and connect both in abundance, beauty and simplicity. .

Capolona is a small picturesque town located in the beautiful region of Italy, Tuscany. Positioned on the right bank of the Arno river, adjacent to the historical town of Arezzo, Capolona can be truly considered a gateway to the Casentino area. The town enjoys a great positioning at the junction of Casentino and Valdarno valleys, a location which conditioned it to become a major center for the relations between Florence and Arezzo throughout time.

A serene and charming little town, Capolona is located at an altitude of 263 metres above sea level and has approximatively 5000 inhabitants. The Municipal territory of Capolona covers an area of 47,37 square kilometres in the Valdarno area of Arezzo on the borders of Pratomagno. Its history goes back in medieval times, as it was founded around the 10th century, reaching its current form in 1845. This is the time when the village of Lorenzano which was part of the municipality of Castel Focognano, and the village of Baciano formerly included in the Subbiano Municipality, were annexed here, along with other territories that belonged to the municipality of Talla.

The entire area of Capolona is dotted with ancient fortresses, medieval castles, century-old bridges and churches, testimony to the great historic importance of the area since medieval times. Nearby to the current main square of Capolona there was a Roman bridge, bombed during the World War II, which certifies the fact that the site of Capolana might have been a great communication network in Roman times, yet there are no historical documents to prove the foundation of a Roman settlement on this territory.

The medieval country House where you'll stay is named HOUSE ON THE ROCK because it was built on a part of the Casentino's mountain. Historic documents describe it at a Camaldolese Monastry in the XI A.C.

Many architectural featuresand details prove this origin. It was only natural to turn Monasterial hospitality into a warm is to be a warm and cozy home where you can find comfort and relaxation along the famous VIA ROMEA.

Your comfort and well being will be attended to by Giuseppe and local artisans, providing regional fresh food cooked on site, as well as coordinating local site visits to fantastic local restaurants. 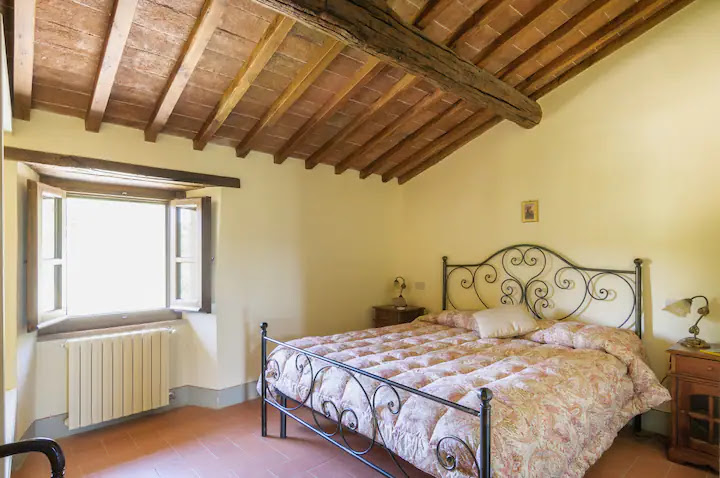 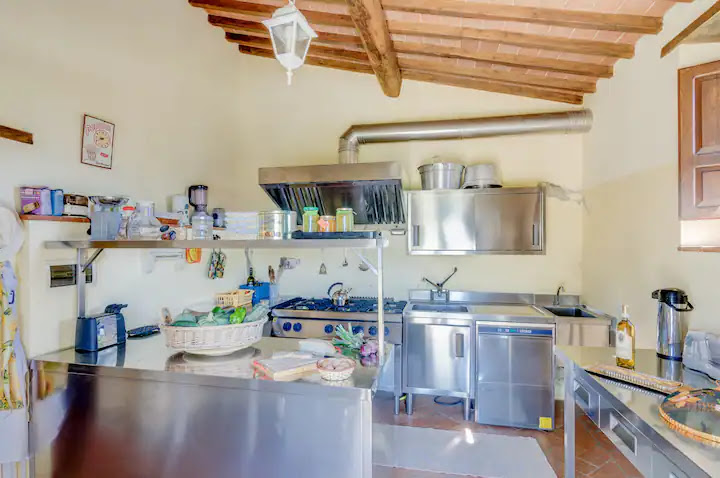 Imagine a space where connection, positivity, mindfulness and well-being all dance together around pure organic food, relaxing experiences and essential joy. This is what this retreat is all about and this is what you are invited to join!

Between intimacy and togetherness the 10 bedrooms, 22 beds, private courtyards and spacious lounging areas offer this home the perfect lodging for our retreat.

Free WiFi is available inside the residence. Although we will be there for rejuvenation and connection, we will have full access to technology and modern lifestyle amenities!

Poolside lounges and other outdoor activities will make this week full of options to nurture the body, feed the mind and delight the soul. Let the flow of life take us on a gentle & beautiful motion and experience La Dolce Vita.

Your Retreat, Your Experience

There is no greater space to teach about essential lifestyle than one built with the very principles of timelessness, artistry and esthetic balance.

This retreat is focused on the principles of acceptance rather than resistance and remembering our true nature rather than adding new knowledge and confuse the mind.

What if all that was ever needed to be content and fulfilled was here and now? What if the only missing link to happiness was so simple that it is easy to miss?

Enjoyment, togetherness, laughters, connection and living fully without stealing any goodness from each moment is how this week offers you.

Mindfulness is at the core of this Italian experience and we will dive into it from the moment you step foot on Italian soil. Each soul strategy session has been designed to help you shift your perception so that you learn to elevate your consciousness and transform a challenge into an opportunity.

Daily Yoga practices, individualized sessions, group work, essential conversations, poolside meditations, active journaling exercises and many other Conscious Catalyst© proprietary protocols will help you reveal the peaceful sanctuary that already exists within you. Although it is not magic, it will feel like a series of magical moments filled with self-realizations, greater understandings and a renewed sense of clarity about yourself and your life.

With its rolling hills and its nurturing soil, Tuscany grows more richness than many other places in the world. Knowing how to harness these soils and harvest the bounties of goods it shares is an art. This art, we will learn it for our own self so that we can use it everywhere we go to nurture our own self.

What is good for our body? What feels aligned with our truth? What do I truly need? How can I best support myself? These are examples of essential questions that we will learn to ask ourselves. Our mind is a fertile soil that requires attention, boundaries, care and adaptability. It is all about the power of listening, trusting our own self, honoring our truth and acting from a place of self-love and self-acceptance. At times, this may mean learning to let go and let live.

Aline Hanle is a soul strategist, a spiritual guide and a mindfulness teacher. She has spent 25 years of her life deciphering the language of her soul, shifting her entire reality from victimhood consciousness to a joy-based perceptive one and has led many on their path to conscious lifestyle.

She owns Conscious Catalyst, a life coaching company that offers a series of proprietary tools and experiences that help identify and re-activate one’s potential and facilitate and integrate one’s individual evolution.

Aline’s programs, modalities, workshops and retreats have contributed in transforming hundreds of lives and getting consciousness closer to a higher-frequency reality where the heart and mind can collaborate in harmony.

Her latest work is focused on facilitating individual conscious evolution from a 3D reality-simulation (Material world of fear) towards a 5D reality-oneness (Dimensional Harmonic Experience). Aline teaches in English and French.

Dedicated to provide the best in Conscious Lifestyle strategies, Aline's motto is: "we re always at the right place, right time, doing the right thing and being the right one".

Let me introduce you to Maria! Italian extraordinaire, remarkable being and beautiful friend, Maria has been my Italian teacher for the past year and if someone knows Italy, it is her! I should even say that if this Italian retreat exists, it is because she has been a constant support and cheerleader to help me see the possibilities.

Maria will be our amazing cultural liaison and guide to help us enjoy this Tuscan experience.

As an Italian native, also fluent in English and French, she will be an invaluable asset to this retreat giving us a way for us all, foreigners, to feel like family! If you have any specific requests, questions or interests about Italy, before and during the retreat, feel free to ask us, we will do our best to answer them all!

Marilù a Biologist/Nutritionist with degress in and in Psychology. I’m a council member of A.M.I.K. (Italian Medical Association Kousmine), member of the Scientific Committee of the Italian Vegan Association and professor at the School of Naturopathy CNM in Padova and at UniCusano University in Rome.

I’ve been a guest on several Italian TV shows and several magazines have featured my method: For Men, F, Vanity Fair, ELLE, etc. I hold classes and seminars in Italy and abroad.

I have written several books, and I’m one of the protagonists of Thomas Torelli's film “Food roLOVution”.

Here is our itinerary tentative to help you envision yourself in this delightful experience. After your registration, you will receive an email with all the essential information to help you pack your bags and be mindfully ready!

Grounding meditation, Guided Visualization, Polarity Journaling to determine your individual "tipping point" and your most anchored sense of self.

Psychoalimentation®, whose trademark was registered in 2006, is a method that considers the individual in all its parts, and which allows to achieve physical and emotional well-being taking into account the connections between the various dimensions of the Self.

One of the 14 most beautiful wineries of Tuscany, thanks to its unique wine cellar in bio-architecture, and the 'Think Green' philosophy for a sustainable and environment-friendly

Part mindful experience, part intuitive exploration, this morning session will offer you a way to travel through 5 different emotional levels and retrieve their frequencies so that you expand your "EMPATHY" asset which is the determinant factor of any and all human interactions, communication and evolution.

At the Sensory Spa it is possible to regenerate the body and the spirit through the thermal waters of Chianciano Terme and rediscover yourself through a journey into the senses and elements. Here the classic spa treatments harmonize and blend with oriental philosophies, creating a magical place where you can pamper your body and your senses.

Intuition, Soulful Guidance and Playfulness, all at once with this relaxing, entertaining and enlightening day around a series of poolside transformative experiences.

Enjoying our last full day in Tuscany, we will make the most of these hours with a series of wisdom practices and soul embodiment session during which the body, mind and spirit will experience vertical .

Situated along the right bank of the Arno river, Capolona is the true gateway to the Casentino area, being at the junction of the valleys of Casentino and Valdarno, in a strategic position which made it a key center for the relations between Florence and Arezzo in the centuries.

One hour away from Florence by car and 2 hours by train.

Capolona between Florence and Arezzo